A Short Hike on the Pennine Way — Contours Walking Holidays

A photographic report of a short hike on the Pennine Way. Join us from Edale to Hadfield through the windswept spaces of the Dark Peak.

Being based on the edge of Peak District opens up a wealth of walking opportunities for me. However, one of the best-known long-distance walking trails in the country, the Pennine Way, starts out from Edale in the Dark Peak, and I’d never tried it.

I’d explored the Pennine Way through the Yorkshire Dales in previous years and discovered it’s a route that never fails to impress, always offering a challenge amidst spectacular scenery. With a day to spare in late September, I decided to head up to Edale to walk the first leg of the route.

Edale to Hadfield: The Plan

My walk would take me from Edale, around the western edge of the Kinder Plateau and over Bleaklow, to Torside Reservoir, where the Trans Pennine Trail would bring me to Hadfield Station to return to Edale by train.

I planned a short deviation from the trail to visit the crash site of a B-29 Superfortress Reconnaissance plane, which came down on Higher Shelf Stones in 1948, tragically killing all 13 crew. The wreckage is still in place alongside a memorial to the disaster.​

Overall, the walk would be a shade under 20 miles. With reasonable weather forecast during the day, I parked up at Edale car park, bought a mouth-watering slice of cake from the Penny Pot Café, procured change for the car park machine (which surely, in this age of contactless payments, should not require cash only) and set out for the day… 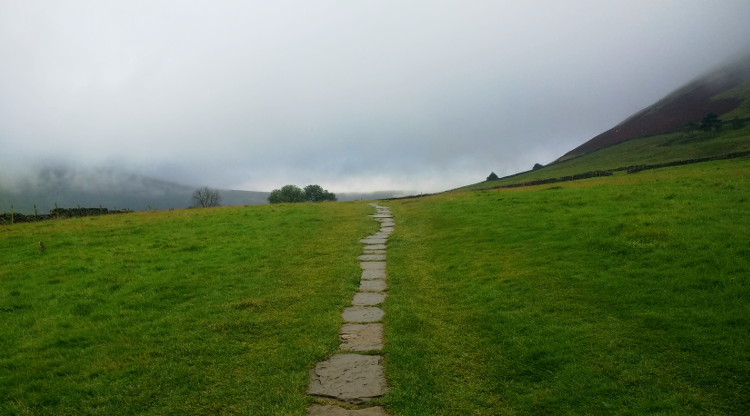 A flagstone path leads the way out of Edale. Low cloud conceals the spectacular scenery ahead.​

Over the rise of a hill and the sun begins to poke through the cloud, revealing the hills all around, with Brown Knoll to the left and Jacob’s Ladder and Edale Head around to the right. 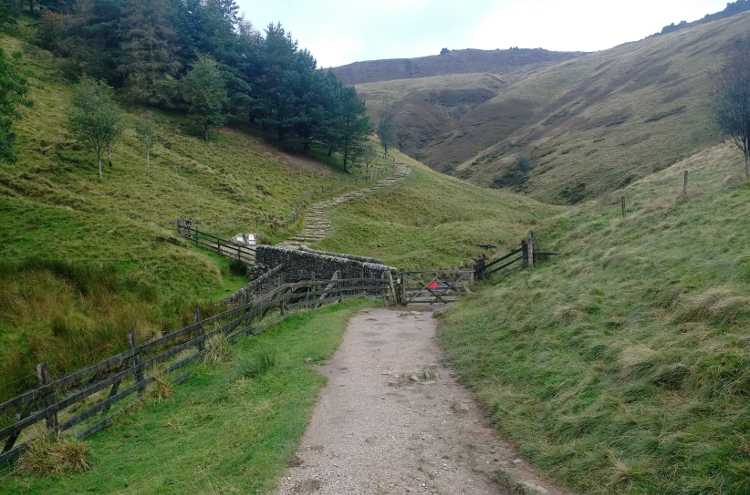 ​A bridge crosses the stream at the foot of Jacob’s Ladder, with rocky steps heading upwards on what seems to be a gentle enough gradient. Once round the corner this heads sharply upwards! 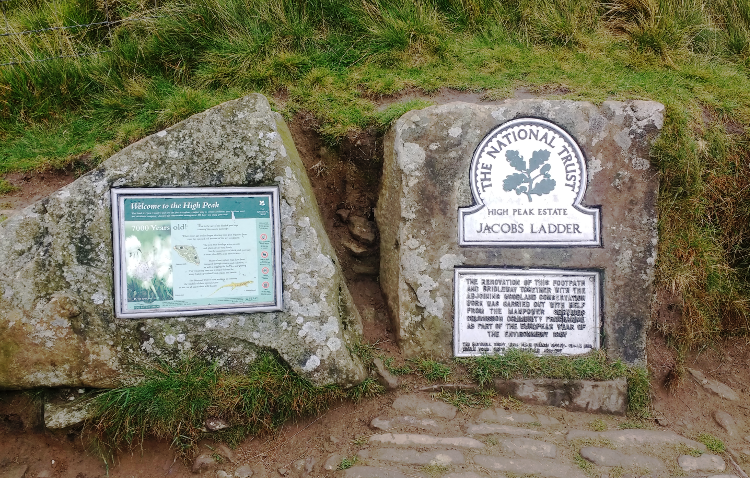 The Peak District was the first National Park, established in 1951 and a legacy of the ‘Kinder Mass Trespass’ of 1932. Kinder Scout and other areas were acquired by The National Trust who continue to maintain the area.

Jacob’s Ladder is evidently named after one Jacob Marshall, a tradesman who took wool over the moors and cur steps into the steep hillside to make this journey shorter and less arduous, while his packhorses travelled along the longer bridleway.

Once the steep ascent has been accomplished, a look back down the valley from below Swine’s Back shows the hillsides and folds of land that make up this beautiful landscape. 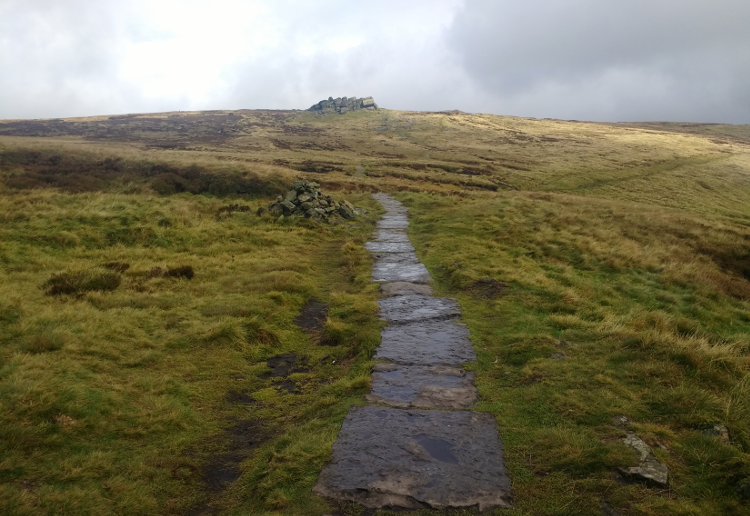 Edale Rocks stand out against the grey skies behind as the stone path continues to ascend towards the Kinder Scout plateau. Beyond Edale Rocks, the Trigpoint of Kinder Low is reached. At 633m above sea level, it’s still 3m lower than the official summit of Kinder, a short distance northeast across the boggy peat of the plateau. 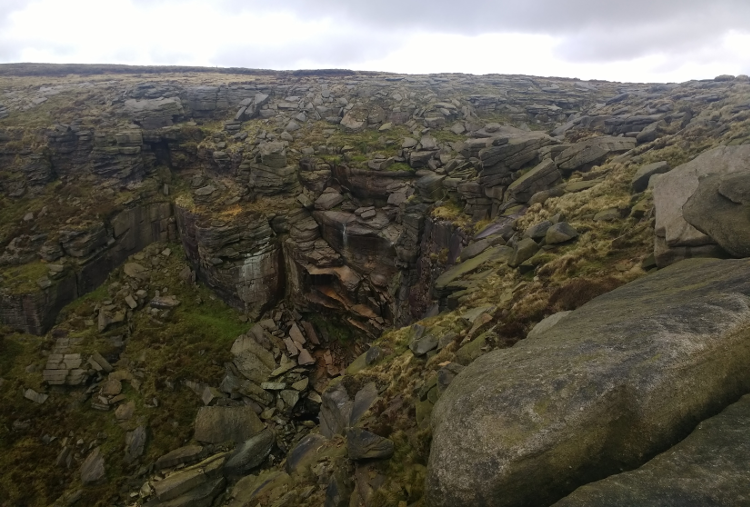 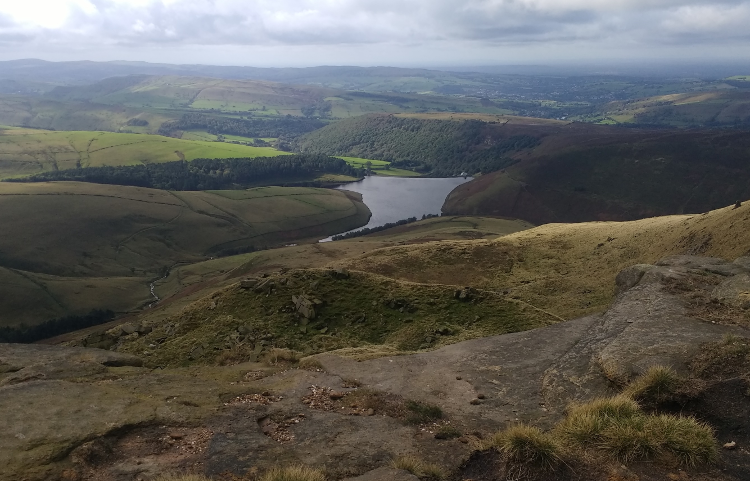 Heading west from Kinder Downfall, a path heading down to Kinder Reservoir is reached. Taking this would enable a shorter, circular walk to be completed, heading back to the start by linking to the bridleway from Coldwell Clough and via Edale Cross. 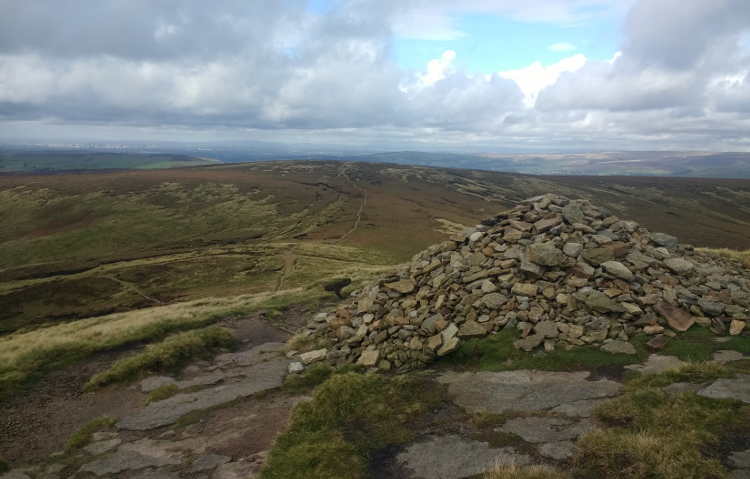 A cairn is reached providing a fantastic, wide field of view ahead, with the Pennine Way stretching out into the distance. 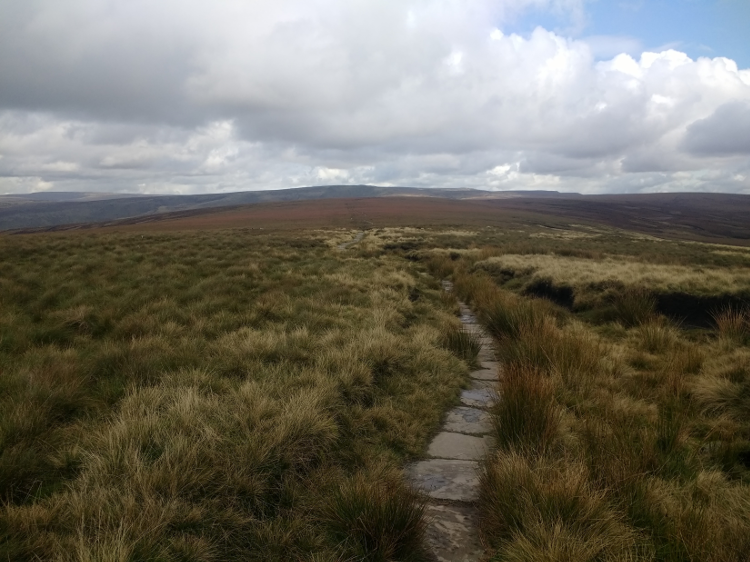 Flagstones lead the way, providing a solid footing through the otherwise extremely boggy landscape. Frequently water covers the stones, which pass over and through numerous gullies and channels, with the ground like a sponge, soaking up and holding onto the overnight rain. Looking back towards the Kinder Scout plateau shows just how flat this area of high land is, along with the drama of the steep-sided northern slopes. In the foreground, a reminder, yet again, of the marshy peat bog this area is made up of. 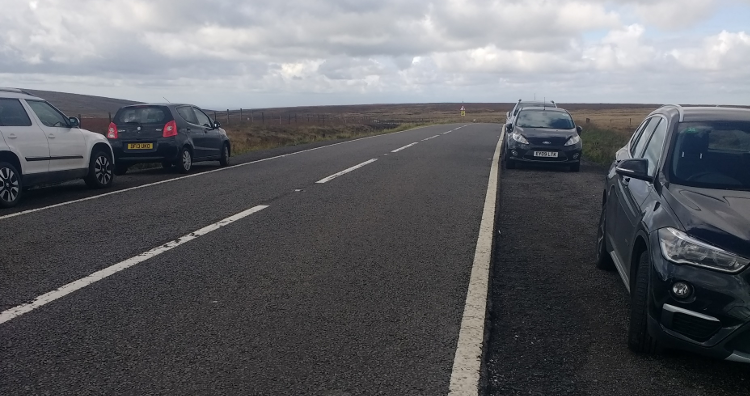 The A57, Snake Pass, carries traffic over the Pennines between Sheffield and Manchester, originally designed by Thomas Telford and opened in 1821.​

It’s also approximately the halfway point of the walk, indicating that the Kinder section has been completed and it’s now onwards to Bleaklow.​

At over 500m above sea level, the road is frequently closed due to snow in the winter. The cars parked here enable walkers to access an otherwise pretty remote area – not bad for popping out to walk the dog!​ The trail ahead is well-surfaced as it heads towards Bleaklow, with the 621m summit of Higher Shelf Stones to the left. 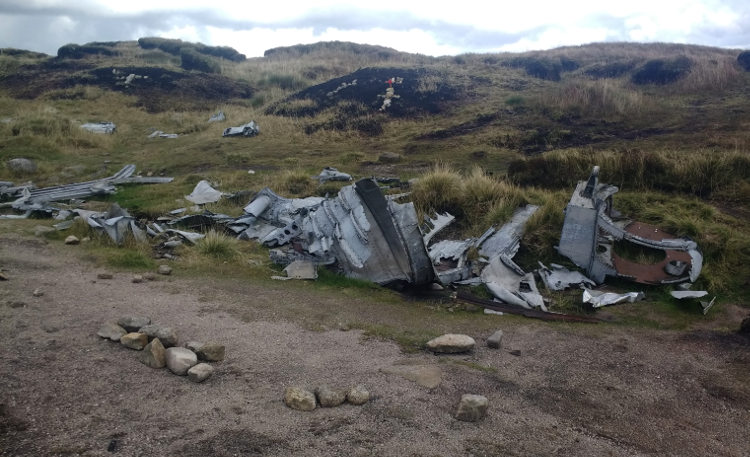 A fairly vague path from Hern Clough heads west towards the Higher Shelf Stones summit, scene of a catastrophic crash in low cloud in November 1948, when it is believed that the pilots began their descent over the hills too early, hitting the ground close to the summit.

The plane wreckage is still evident, spread across the landscape as a stark reminder of that day’s tragedy, including the engines, wing and fuselage sections, undercarriage and gun turrets. 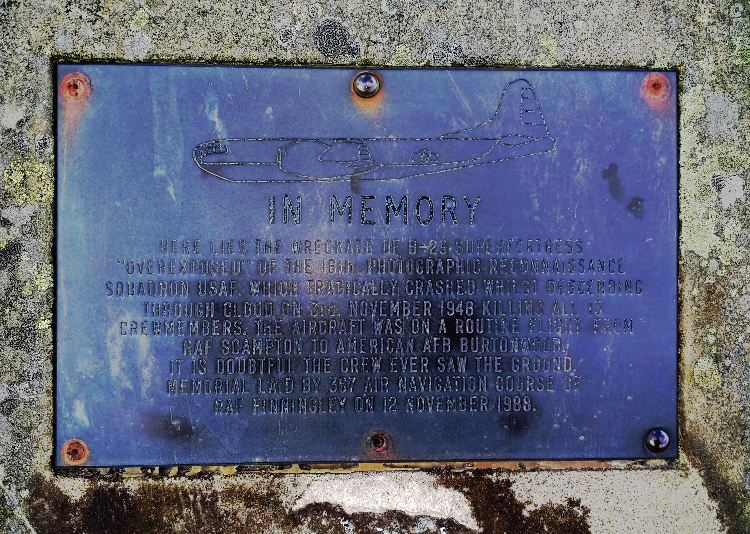 A solemn memorial pays tribute to those who lost their lives in the crash.​ The plaque reads as follows:

Here lies the wreckage of B-29 Superfortress "Overexposed" of the 16th. Photographic Reconnaissance Quadron USAF. Which tragically crashed whilst descending through cloud on 2rd. November 1948 killing all 13 crewmembers.

The aircraft was on a routine flight from RAF Scampton to American AFB Burtonwood. It is doubtful the crew ever saw the ground. 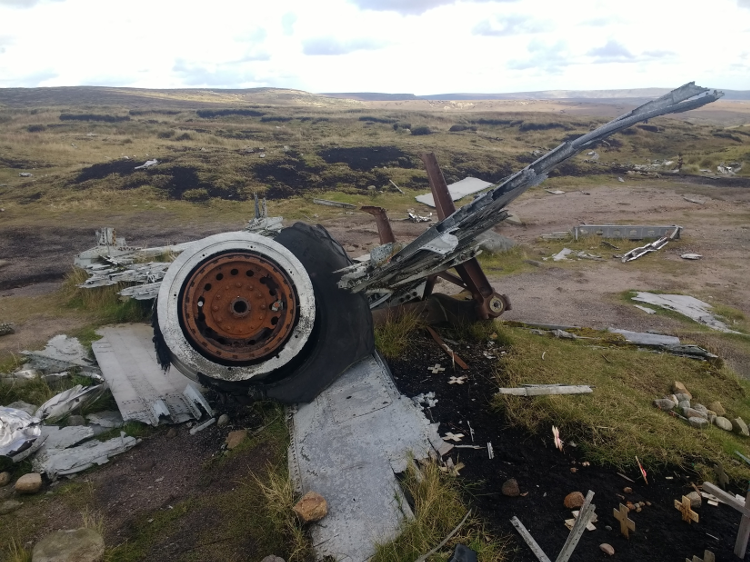 A landing wheel, tyre still partly intact and surrounded by fuselage debris, lies at the centre of the crash site. This is just one of several locations on the hills of the Dark Peak where low cloud and poor weather has led to the demise of aircraft crossing this unforgiving landscape, in the days before more advanced flight instrumentation became commonplace. Blue skies herald the arrival at Bleaklow Head, at 633m the same height as Kinder Low, and marked by this impressive cairn. Sheep appear as I round a bend in the path, a reminder that even up here in the wilds of the Dark Peak farming still goes on. Ahead, the deep valley of Torside Clough leads the way to the reservoir below. 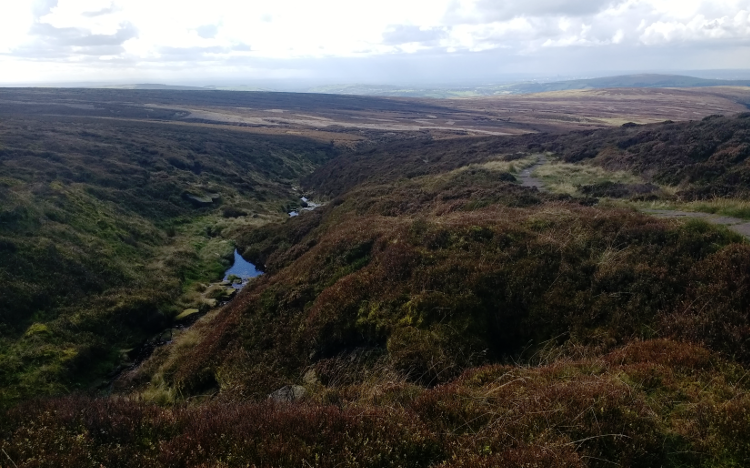 The sound of gun shot echoes through the air, indicating that a grouse shooting party are nearby. 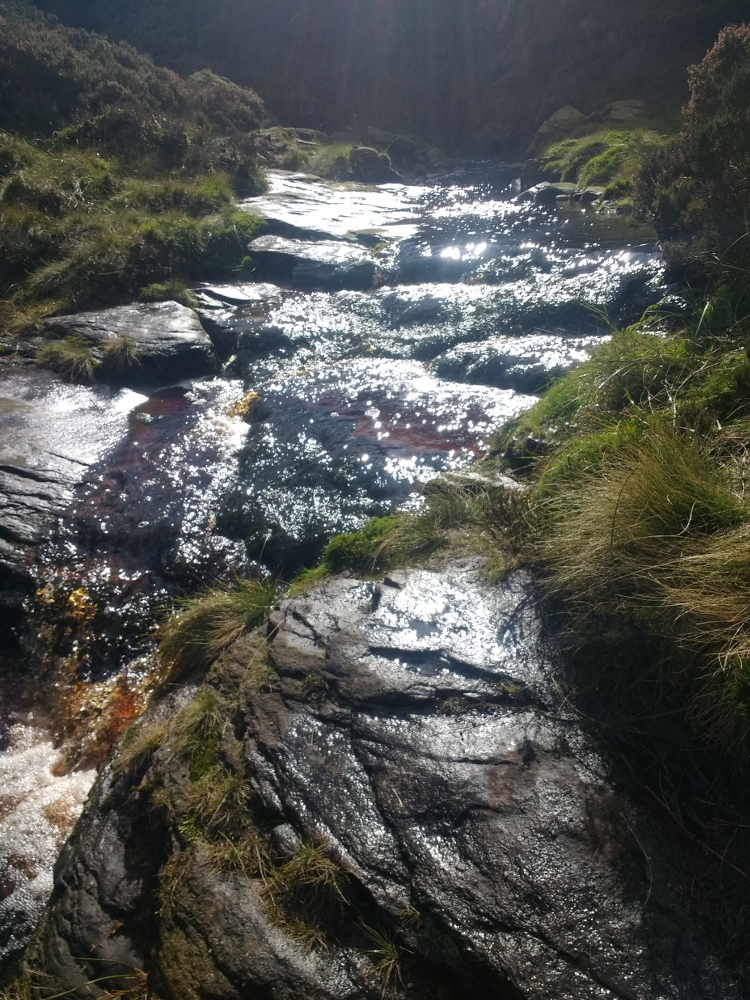 The Torside Clough stream sparkles in the reflection of sunshine at a crossing. Luckily the stone provides a good level of grip to help get across easily.​ Ahead, the deep gulley created by the stream cuts into the landscape, with the route tracing the upper edge of the steep-sided valley.​

‘Clough’ is a name featured across the Dark Peak, simply used as a term for a gorge or narrow ravine. Ahead Torside Clough stretches on providing a glimpse of Torside Reservoir. Here, the path follows the top edge of the steep-sided valley around on the left. 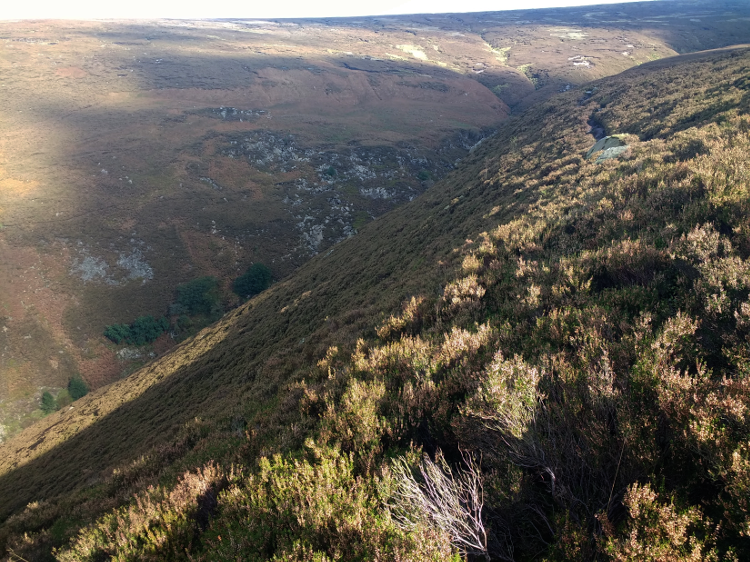 Looking back along the Clough shows just why it often refers to a gorge or ravine, with the gulley cleaved into the landscape. 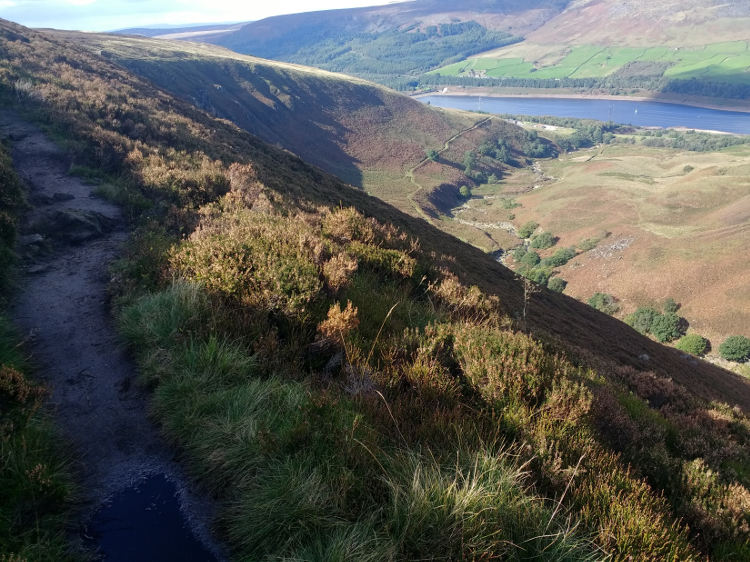 The path is narrow and rocky in places as it traverses Clough Edge, although the exposure off to the side is never so steep as to inflict anxiety – instead it’s a view to savour! Torside Reservoir is a ribbon of water between the B6105 and the busy A628, taking traffic between South Yorkshire and Manchester over the Woodhead Pass. 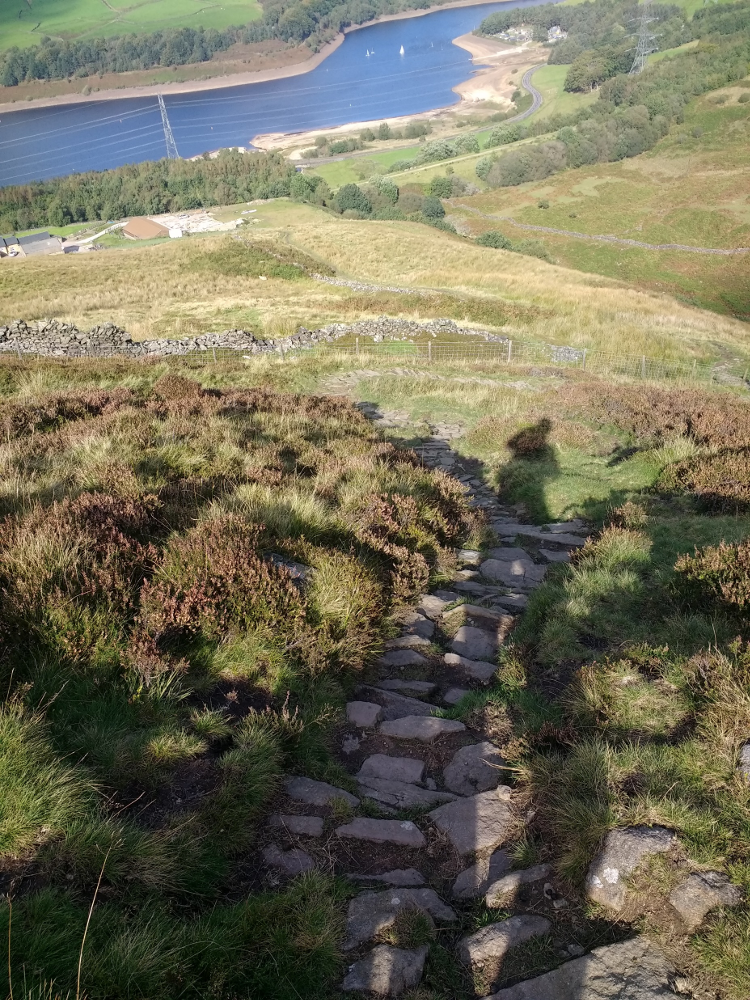 The final section descends steeply from Clough Edge down rocky steps towards the Trans Pennine Way below.​

The Trans Pennine Way runs coast to coast, linking the Irish Sea to the North Sea over 215 miles between Southport and Hornsea, giving access to cyclists and walkers (and occasionally horse riders).​

This final section leaves a 3 mile walk, on an easy, flat surface, to Hadfield railway station, to link back to the start at Edale.

Our Walks · North of England Walking for Wellness: Remembering Loved Ones Lobbying for Support for Accommodation Providers

Book Your Short Break On The Pennine Way